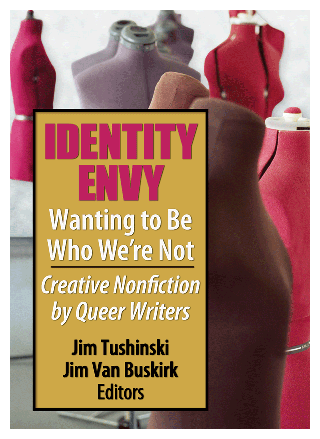 Identity Envy: Wanting to Be Who We're Not is a collection of creative nonfiction by queer writers exploring their attachment to another identity—a different race, religion, ethnicity, sex, nationality, class, a pop culture figure, something, anything—while wrestling with feelings of displacement, of not belonging.

Humorous and hard-hitting, poignant and provocative, Identity Envy includes essays, memoir, and creative nonfiction that explore the dynamics of growing up and being grown up, of wanting to belong and of finding one's way.

While this excellent collection ... allows the short, dark-haired Jewish writers a chance to fantasize about being a tall, blonde WASP or a Canadian to become an American, the ache to be someone else, in the hope to feel “happy and safe” or loved, eventually makes the subject more self-aware ... Readers may not identify with every writer/story in “Identity Envy,” but there is nary a dud in the book; each memoir/essay is poignant and revealing.

What could have become a tedious collection of class writing exercises is instead a provocative display of experiences and influences. The editors are blessed, in fact, by the diversity of their contributors.

[A]n eclectic anthology of engaging essays and memoirs whose message is that the desire to be someone other than who we are is an integral and universal aspects of coming of age... Wildly diverse and achingly honest, the essays that make up this original anthology offer new perspectives on the reasons and rewards for wanting to be who we are not.

The collection is a testament to the power of imagination as a tool for psychological discovery. It is also at times funny, poignant, and compelling in its originality.

This may be among the most radical [book] in recent publication, not because of its politics, but because it takes its stand without relying on either polarization or feel-good superficialities. Instead, the editors have compiled a collection that is characterized by its complexities. This is not so much a book about queer identity as it is about identity itself, about what it feels like to not fit in. And it is about the fantastic alternate selves that can make everyday life a little bit easier... More than anything, it is the true diversity of its voices that sets Identity Envy apart as a deeply meaningful text.

Identity Envy is an entertaining and enlightening collection of personal essays about the desire to be someone other than who we are.  The writers take on matters of class, race, religion, regional differences--and so much more--all with intelligence, insight, and compelling honesty.  In tone, the pieces vary from the comic sizzle of  Mike McGinty's "You Picked a Fine Time to Leave Me, Helen" to the rueful nostalgia of Robert Boulanger's "Acting American."  The book made me think differently about my own identity and the way we all make peace (a frequently uneasy peace) with ourselves.

Identity Envy offers up a collection of truly fresh, inspiring and revelatory explorations of those shifting sands that make up the unsure ground of who we think we are and what others assume us to be. A fascinating exploration of the formation of identity...filled with wonderful humor, inspiring tales of courage, and the enthusiasm and joy of self-realization and growth.