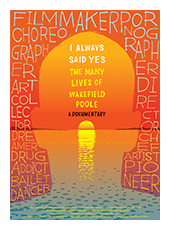 I ALWAYS SAID YES: THE MANY LIVES OF WAKEFIELD POOLE

Produced and directed by Jim Tushinski

I Always Said Yes: The Many Lives of Wakefield Poole tells the story of a sometimes overlooked gay liberation and independent film making pioneer. In late 1971, Wakefield Poole, a respected Broadway dancer and choreographer, had the audacity to put his real name above the title of his first film, a low-budget, hardcore gay erotic feature called Boys in the Sand. And to make sure everyone knew about it, Poole advertised the film in the New York Times, creating a sensation. In an era when anyone making, promoting, or appearing in what the US government considered "pornography" could be liable for prosecution and jail time, Poole was a remarkably open and honest gay film maker. He became internationally famous and his movies screened for years as examples that films could be artistic as well as sexually explicit. 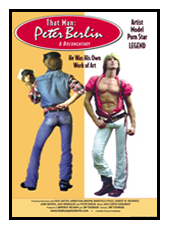 That Man: Peter Berlin had its world premiere at the prestigious Berlin International Film Festival and was an official selection of over 65 film festivals, including the Seattle, Chicago, Palm Springs, Rio, and Durban International Film Festivals. In January 2006, the documentary opened theatrically to great acclaim. A Special Edition DVD was released by Water Bearer Films. In addition, That Man: Peter Berlin is available for streaming on Vimeo On Demand and Fandor.

With his trademark Dutchboy haircut, Tom of Finland physique, and oh-so-tight trousers, Peter Berlin was the poster boy for the hedonistic and sexually-liberated 1970s. Jim Tushinski’s fascinating, sexy, and ultimately touching documentary, That Man: Peter Berlin, traces Berlin's story over the past 40 years, from his birth in wartime Germany to his current life in San Francisco, and shows the human being behind the icon.